Ferrara:
city of art and culture

Ferrara is a nice city of art and culture. Thanks to the architecture of its monuments and streets, and thanks to a still preserved Renaissance atmosphere, in 1995 the city centre of Ferrara was included in UNESCO World Heritage List.

Its origins are mysterious: according to a legend, Ferrara could be a Troian girl who ran away from the war and founded here a new town. Another myth connected to Ferrara is the one of Phaeton, stuck by Zeus with a lightning while he was travelling across the sky on board of Apollo’s chariot. Ferrara was mentioned for the first time in 753 a.C. in a document, issued by Astolfo king of Longobards which attested his control over the city. Between the end of the Longobardic period and the year 1100, Ferrara became feud of the count of Canossa. After 1100 d.c., the city became an independent district characterised by a bloody time, when the two main families, Salinguerra and Adelardi, competed for the power over the city. In 1242, the family Este came to Ferrara and, after many conflicts, achieved the full control over the city.

It began a golden age for Ferrara, which lasted all over three centuries: under the Este government, Ferrara became one of the most famous cultural centres of the Renaissance. The marquis Leonello was surrounded in his court by artists, academics, musicians. 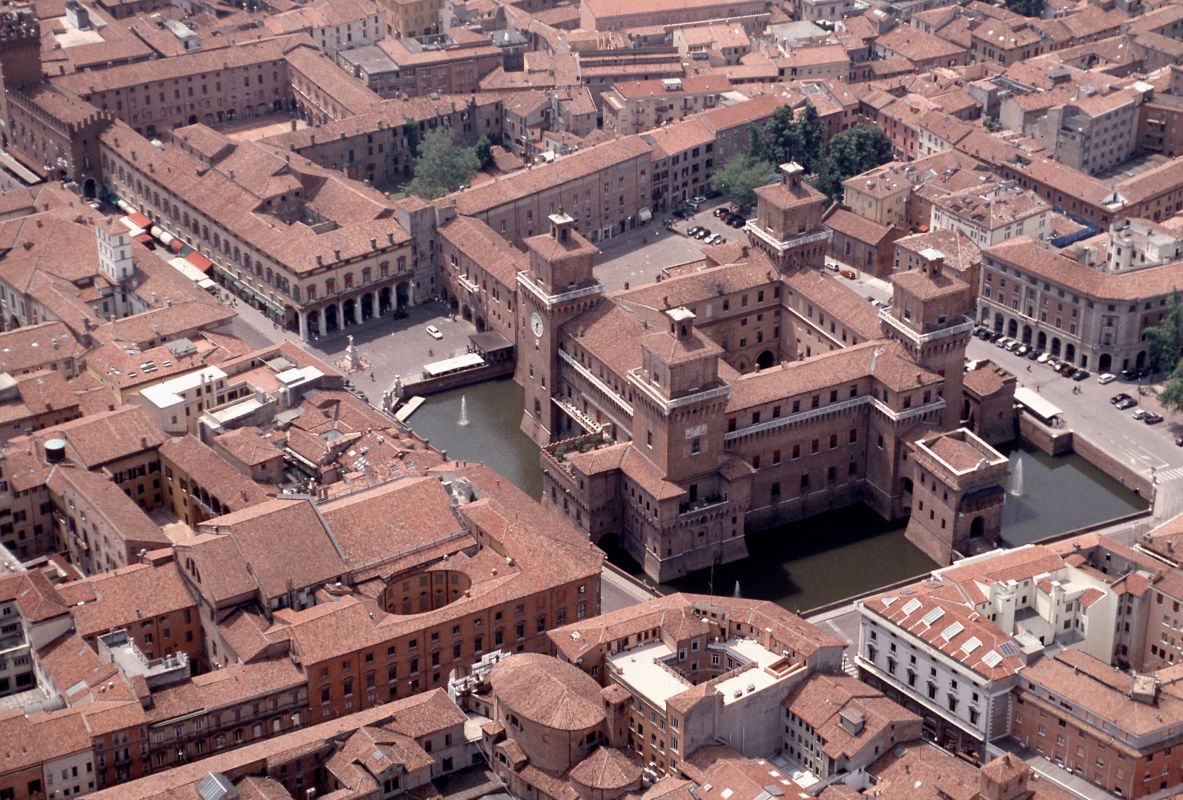 THE GOVERNMENT OF ESTE IN FERRARA

His brother Borso, is remembered for the measures employed to reclaim his territory and for the commission of one of the most beautiful profane painting, Salone dei Mesi in Palazzo Schifanoia.  Borso d’Este was, most of all, first Duke of Ferrara, nominated by Pope Paul II just few days before his death. Duke Ercole I, the stepbrother of Borso, encouraged the development of theatre and chivalric literature in his court and commissioned the innovative urban project called “Addizione Erculea”. Alfonso I, the son of Ercole I, improved defensive walls around the city, whereas the successor Ercole II ordered the renovation of the Castle after the terrible earthquake in 1570.

Unfortunately, the importance of the Estense Court, the prudent marriage strategy and the battles in order to protect their territory, didn’t avoid the decline of the Este family and the devolution of Ferrara in 1598. This happened because duke Alfonso II died without having any legitimate heir, despite his three weddings, and so Pope Clemente VIII took the territories of Ferrara back into the jurisdiction of the Papal State, since they once were an ancient papal feud. As consequence of this, the Este family transferred its court to Modena.

This return into the Papal State also provoked the establishment of the ghetto of Ferrara in 1627, where the Jews of the city were locked up. Ferrara consequently knew slow changes from the artistic, commercial and demographic point of view. Under the Napoleonic dominion, a big part of Este’s artistic masterpieces was permanently subtracted from Ferrara. In the Risorgimento, Ferrara was annexed to the new Italian state, in 1860. During the First and the Second World War, Ferrara lost a lot of his citizens and suffered heavy damages under the bombardments. The Jews of Ferrara were deported and only few of them came back at the end of the Second World War.

FERRARA IN OUR DAY

Today Ferrara has high standards of life, thanks to a rich cultural offer: important art exhibitions, elegant concerts, sport and music events, such as the Palio which is the most ancient of Italy, and other events.