The Palio of Ferrara, the oldest in the world

Ferrara has the most ancient Palio race in Italy, even older than the famous Palio of Siena. The Palio of Ferrara was established by the municipality in 1279, following the popular tradition celebrating the victory of Azzo VII Novello d’Este, marquis of Ferrara between 1215 and 1264, on Ezzelino da Romano, vicar of the German Emperor Federico II during the battle in Cassano d’Adda in 1259.
In 1279, the municipal statutes established the tradition of four races (male, female, donkey and horse) on 23th April, celebration of S.George, the patron saint of Ferrara, and on 15th August, feast of the Assumption of Mary.

Chronicles of the time testify of similar races to celebrate important events as birth, marriage or visits of eminent lords. Races in Ferrara were so important that noble families from other cities came to Ferrara to take part to them. In 1466, king Ferdinando of Naples let his horses compete, whereas in 1475 the 19 horses of Gonzaga’s family from Mantua won the Palio. The first prize was in fact a “palio”, a decorated piece of fine clothes; and the second and third prizes were a split-roasted pork and a cock. 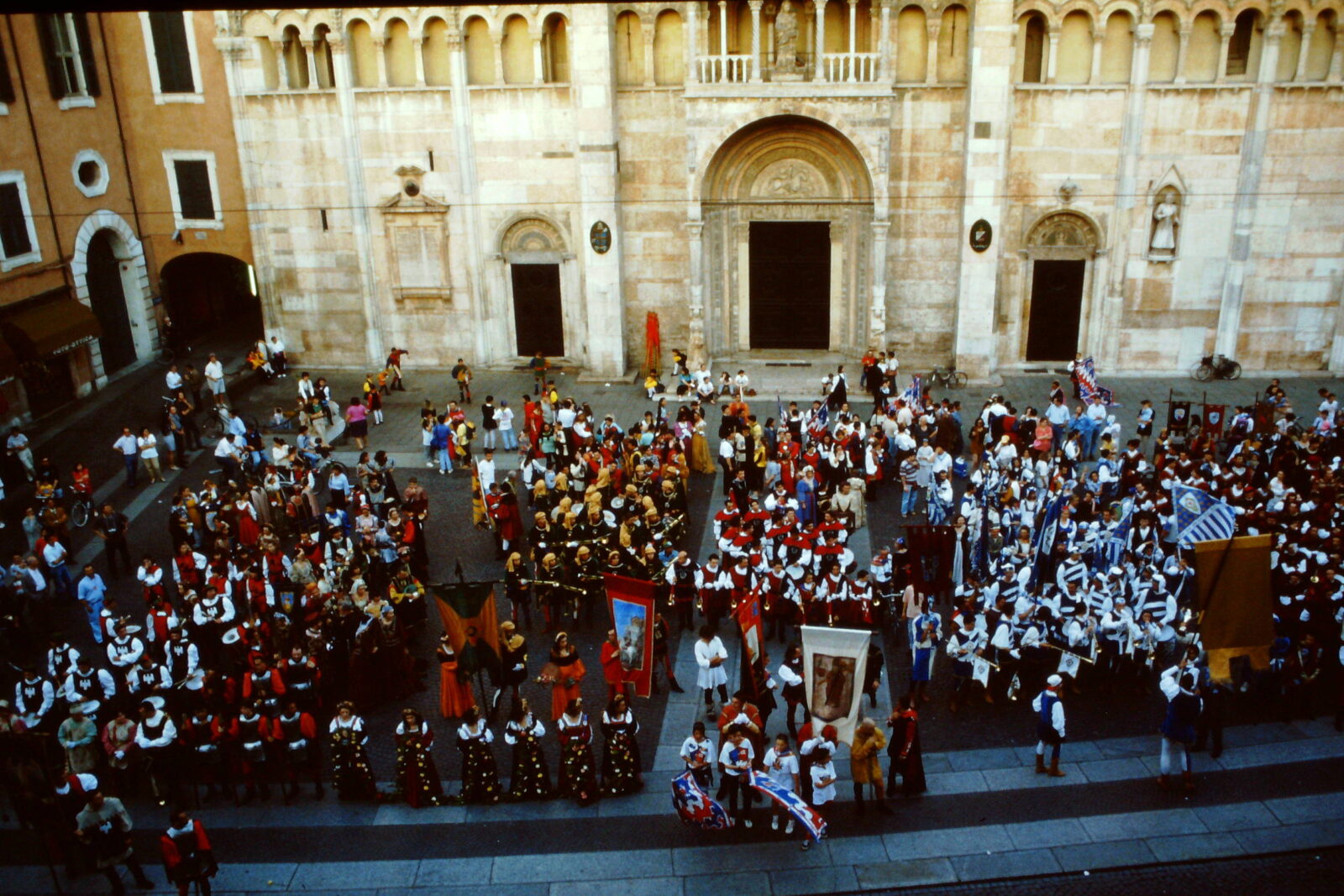 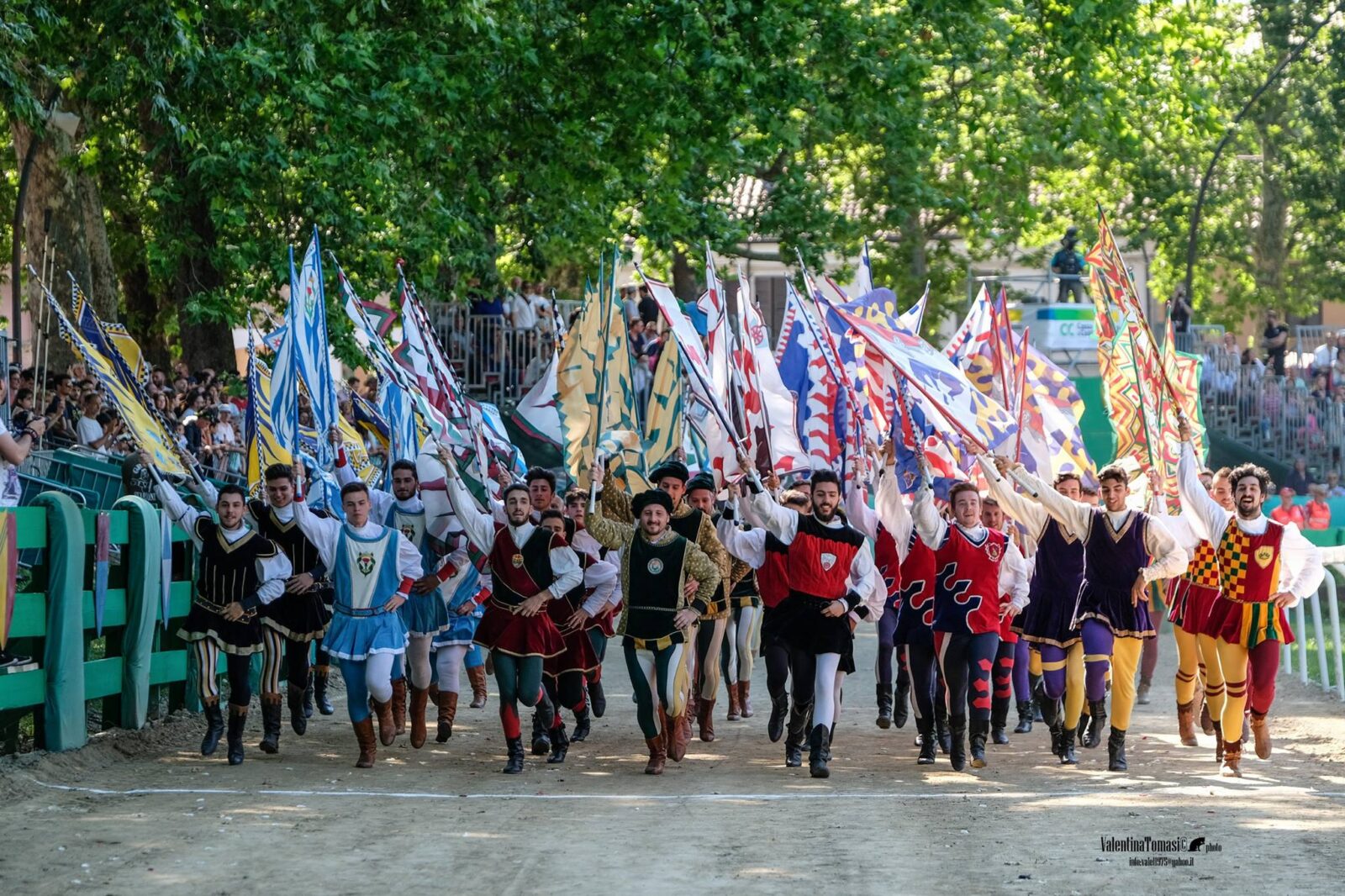 The modern Palio of Ferrara

Today, the Palio of Ferrara takes place once a year, on the last Sunday of May. This date recalls the race that ran in 1471 in order to celebrate and welcome Borso d’Este coming back from Rome, where pope Paul II nominated him Duke of Ferrara.

After the devolution of the Este’s territory to the Papal States, the races of Palio were still run but just to celebrate Carnival. In the first half of 1800 horse races were sporadic; in 1930 a new tradition of Palio races began but it was suddenly interrupted by the Second World War. In 1968, Nino Franco Visentini organised and promoted the Palio in the modern age and it still lives today.

Today there are four Palii: the Green one, dedicated to S. Paul, the prize for the female run, the Red one, dedicated to S. Romano, the prize for the male run, the White one, dedicated to S. Maurelio, prize for the donkey run and the Gold one, the precious clothes dedicated to S. George, prize for the horse race.
Eight districts of the city (called “contrade”) compete for the prizes: four “rioni” (districts of the city inside the walls) and four “borghi” (large districts outside the walls).
Every “contrada” is represented by two colours and a symbol, taken from the ancient heraldic coats of arms of the Este family, that describes virtues and characteristics of the lord of the city.
– “Rione San Benedetto”: colours white and light blue. Symbol: diamond, symbol of Ercole I d’Este, representing incorruptibility and strength of the Prince. The ring represents the marriage strategy with the most important families of Italy;
–“Borgo San Giacomo”: colours yellow and blue. Symbol: the white eagle, symbol of power and patronage of the Este family;
– “Borgo San Giorgio”: colours yellow and red. Symbol: hydra who comes out from the fire, personal emblem of the Duke Borso, symbolizes the deadly sins, purified from the fire;
–“Borgo San Giovanni”: colours blue and red. Symbol: the blindfolded lynx, that represents the ability of Nicolò III, the astute and inflexible marquis of Ferrara from 1393 to 1441, to be a fair judge;
– “Borgo San Luca”: colours: red and green. Symbol: a wooden fence (“paraduro”) that represents the great recovery works commissioned by Leonello and his brother Borso to reclaim the territories;
–“Rione Santa Maria in Vado”: colours yellow and purple. Symbol: unicorn, the mythological creature who purifies waters, which represents the restoration work promoted by the Este family;
– “Rione San Paolo”: colours white and black. Symbol: the Este eagle on wheel.
– “Rione Santo Spirito”: colours green and yellow. Symbol: a grenade with triple flame, emblem of Alfonso I, the duke who personally handled the armaments. 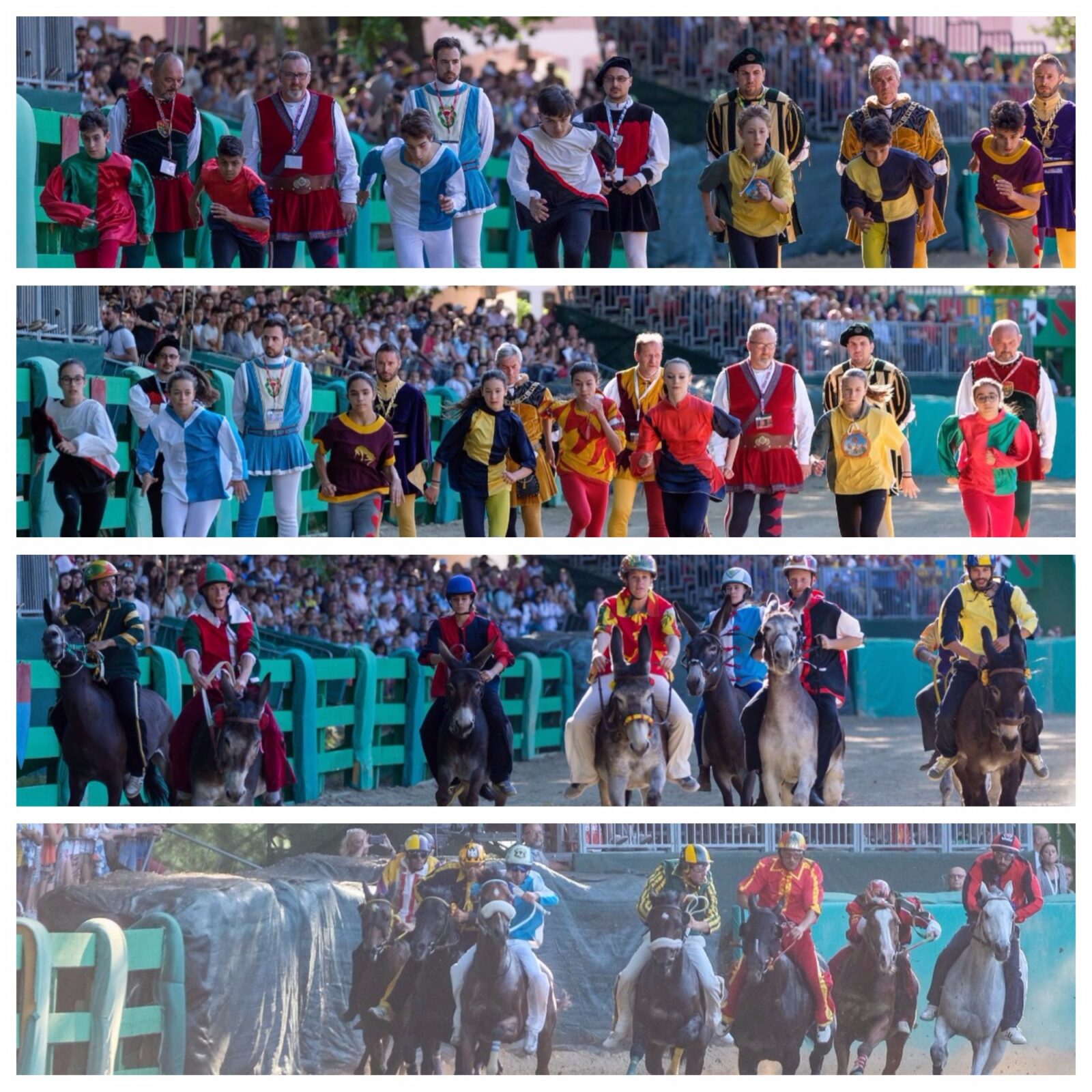 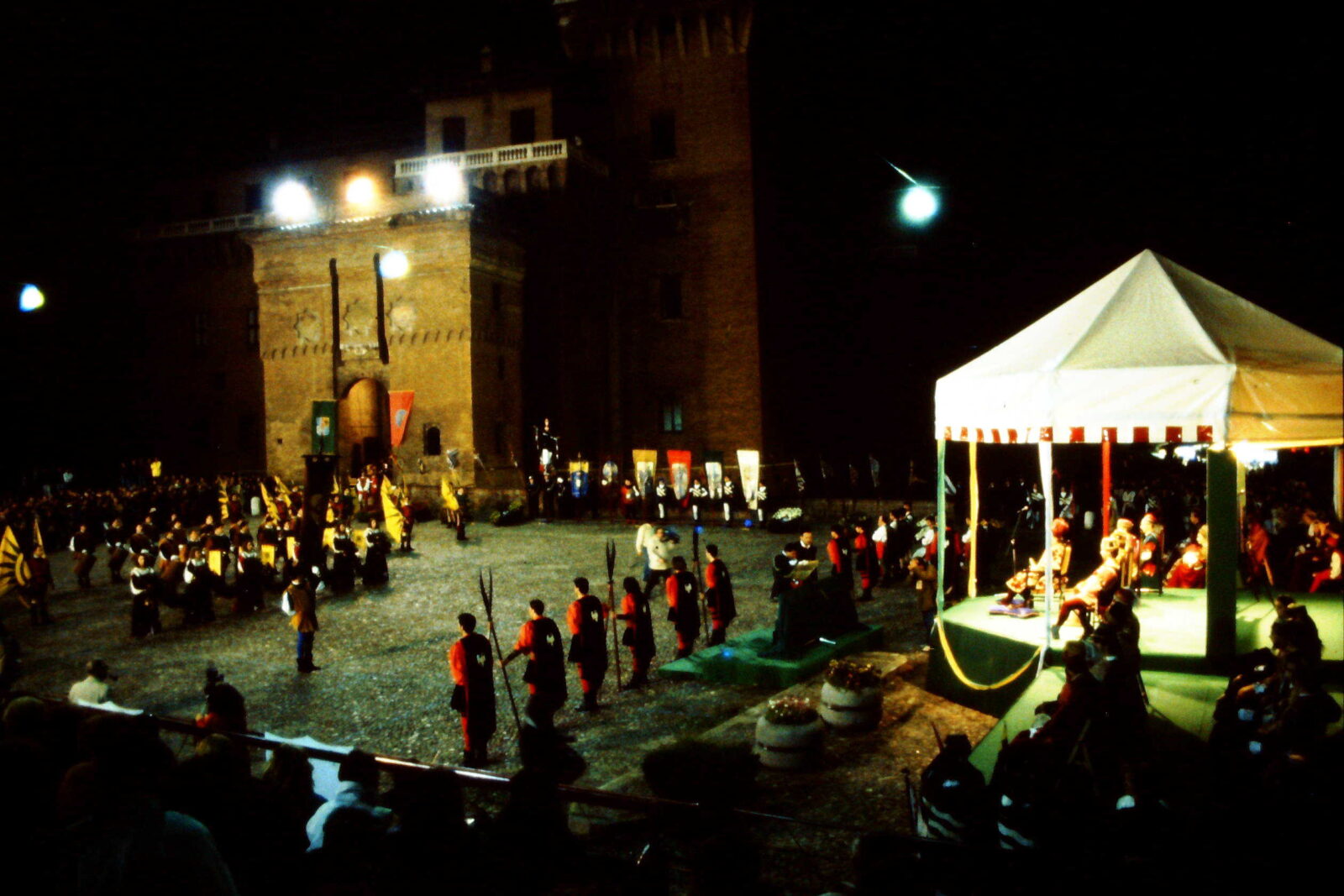 The month of May

Historical events in Ferrara in the month of May

The Palio of Ferrara is not only races; the whole month of May is in fact dedicated to many events tied to the renaissance memory.
– Blessing of the ceri and of the Palii  takes place in the Cathedral, where the whole Court of the Duke and some delegates from the Contrade come and attend the holy blessing celebration . This event lets understand the importance of the religious aspect in Estensi’s life.
– The Ancient games of the Estensi flags where musicians and flag-wavers of the Contrade compete for the victory in flag-throwing competitions.
– Historical Procession is surely the most evocative event. A majestic procession of 1200 people wearing typical Ferrara costumes of the 15th century goes through the beautiful street Corso Ercole I d’Este. The Ducal Court of Borso d’Este, dames, knights, men-at-arms, flag-wavers and musicians let the magic of the Renaissance live again; at the end of the procession the Ducal Court and the Contrade propose a theatrical representation.

At the end of this fantastic month, the “Palio people” don’t stop their activity: events, medieval joust, journey to other cities are a year-long activity of a group of people who loves his city and the ancient traditions